Fighting Anti-Black Racism in the Workplace:

Black History Month is a time to honour and celebrate Black people’s past and present accomplishments, their contributions to Canadian society, and their ongoing struggle for equity. This is a time to reflect on the strength and resiliency of people of African and Caribbean descent in Canada, while committing to fight against systemic discrimination and racism in our communities.  Read more

Dr. June Francis, Director, Institute for Diaspora Research & Engagement at SFU and a Director of Hogan’s Alley Society. Dr. Francis will address, discuss, and answer questions on the “History of anti-Black Racism in Canadian Schools and Universities – the significance of the Scarborough Charter for addressing anti-Black racism in Canadian institutions of higher education.”
This talk will explore the ways in which the history of Canadian educational institutions have contributed to persistent and contemporary anti-black racism in the educational system.
Read more and register for this webinar

In May of 2021, PSAC hosted an online webinar on understanding systemic racism in the labour movement. Presented as a panel discussion facilitated by PSAC-NCR Regional Executive Vice-President Alex Silas, Émilie Nicolas and Eagleclaw Thom, the webinar helps us understand systemic racism by focusing on the question of white privilege:

To view a recording of this webinar and others hosted by the PSAC, VISIT THIS LINK.

Jeremy Dowsett, What riding my bike has taught me about white privilege

Carol Wall, Dear White Sisters and Brothers: A Letter from a Union Educator

There has been a dramatic increase in blatant anti-Asian racism since the spread of COVID-19. Over the last several months, that racism has escalated to frequent and shocking acts of violence against members of the Asian and Pacific Island Communities around the world. Recent attacks include violent elder assaults, racially motivated acts of vandalism and violence, and the senseless murder of six women of Asian descent in Atlanta Georgia.

Yukon Employees' Union stands shoulder to shoulder with members of the AAPI communities in Canada and beyond. Hate has no place in this country.

The Black Lives Matter Global Network Foundation was co-founded in 2013 by Alicia Garza, Patrisse Cullors and Opal Tometi in response to the acquittal in the US of the man who shot Trayvon Martin has been nominated for the Nobel Peace Prize, citing the movement's global impact in raising awareness and consciousness of racial injustice.

Kamala Harris, Vice-President of the United States makes history as the first woman, and the first woman of colour elected to the office. Her election comes at a time of great turmoil in the world, as right-wing nationalism surges and white supremacy comes out of the shadows.  In response to 2020's emboldened violence and state-sanctioned racism, highlighted by the police murders of George Floyd and Breonna Taylor, global Black Lives Matter protests and rallies brought millions into the streets. An increased awareness of the systemic nature of racism, discussions of white privilege and a rejection of the ongoing injustices took hold in white consciousness like never before.

Canada has a history of racism, slavery, and oppression of Black people - and while the comfortable white narrative says that we are a respectful multi-cultural society, Black people in Canada continue to overcome systemic racism and profiling. Addressing unconscious bias and recognizing white privilege is a part of the anti-racism action we can take on as individuals, standing as anti-racists to confront racism where it hides.

Black History Month is an opportunity for all Canadians to learn about the many contributions that Black Canadians and their communities have made and continue to make to this country. This year’s theme for Black History Month is “The Future is Now”, a call to action for us all to build on the legacy of those who came before us, and to recognize the transformative work that Black Canadians and their communities are doing now. 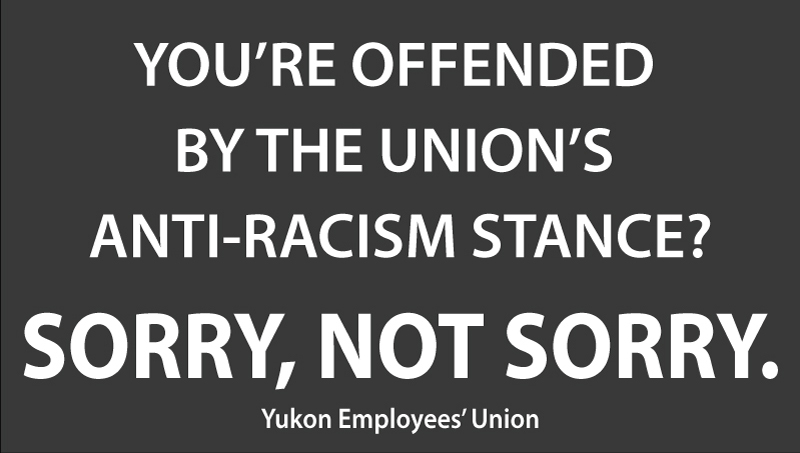 We've had some pretty incredible feedback on our recent anti-racism articles, posts, and graphics. Most of it has been thoughtful, reflective, and appreciative. Unfortunately, we've had a few people crawl out from where they've been hiding to tell us that we ought to shut up and stop wasting their union dues on such activities.

We have a response to those people, and we invite you to read today's blog post about our stance on anti-racism.

We fight racism because we are hard-wired to challenge systemic inequities. And no, we will not be posting an equal number of opposing views to balance things out or to ease the discomfort of those who don't believe they're racist, but clearly are. 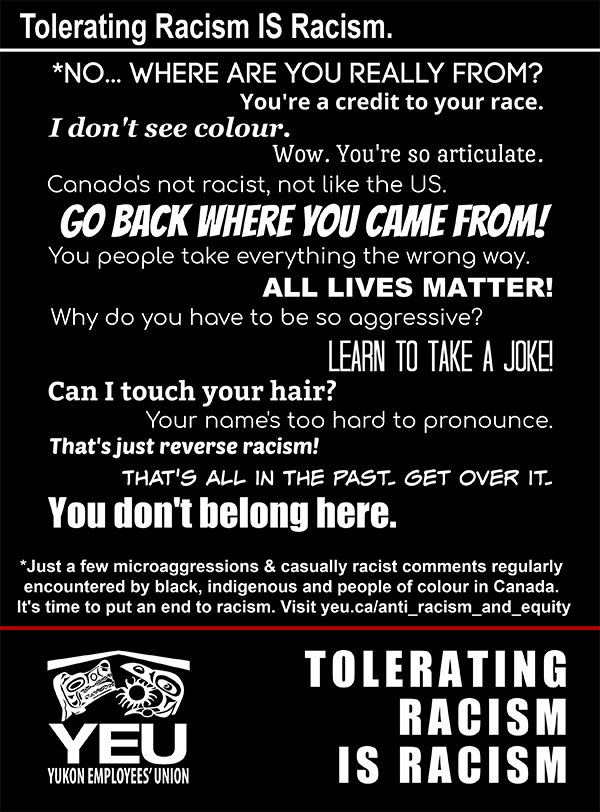 Yukon Employees' Union takes a stand against racism in our communities and in our workplaces. We work to foster spaces where everyone is equal, where racism is not tolerated, where diversity is celebrated and where there are opportunities to learn and grow.

Systemic racism exists in Canada, shaping the lives of our members and their families. Black, Indigenous and People of Colour are affected every day by "a system of power that seeks to benefit white people above all others", as defined by activist and author Desmond Cole,

Right now in Nova Scotia, the treaty rights of the Mi'kmaq are being challenged by Acadian commercial fish harvesters coming from communities around southwestern Nova Scotia. These non-indigenous harvesters are outraged that indigenous fishers are dropping their lobster traps out of season, despite the treaty rights guaranteeing the Mi'kmaq the right to catch and sell lobsters and manage their fishery.

Facing our own internal and unconscious bias can be difficult, but without a willingness to learn, to feel the discomfort and to look critically at our privilege, we perpetuate the racism that's embedded in our country's very existence.

The task of confronting racism head-on is overdue, and it's something that will take effort and time. We have as much to UN-learn as we have to learn. Together, we can do this important work.

CONTACT US for a hard copy of the poster shown here, to share on your Union Billboard at work.

Learn more about Mi'kmaq rights, what is taking place in Nova Scotia and find out how to help at the following links.

NFB FILM: IS THE CROWN AT WAR WITH US?
https://www.nfb.ca/film/is_the_crown_at_war_with_us/

If you, like many of us, are finding it hard to articulate how to discuss issues of racism, injustice, discrimination and privilege, we’d like to encourage you to take some time to learn and listen. Take some time to watch some (or all) of these important films examing race, racial prejudices and privilege within our society.

Filmmaker Ava DuVernay explores the history of racial inequality in the United States, focusing on the fact that the nation's prisons are disproportionately filled with African-Americans.  Watch for free on Youtube or stream on Netflix.
https://www.youtube.com/watch?v=krfcq5pF8u8

Decolonization is for Everyone Nikki Sanchez TedX Talk, April 2019

Nikki Sanchez is a Pipil/Maya and Irish/Scottish academic, Indigenous media maker and environmental educator. Nikki holds a masters degree in Indigenous Governance and is presently completing a Ph.D. with a research focus on emerging visual media technology as it relates to Indigenous ontology. Nikki is currently overseeing the first ever Indigenous Storyteller edition with Telus STORYHIVE; a project to provide funding and mentorship for 30 emerging Indigenous filmmakers in BC and Alberta.
https://youtu.be/pmxD-z1Y8GA

I Am Not Your Negro

In 1979, James Baldwin wrote a letter to his literary agent describing his next project, Remember This House. The book was to be a revolutionary, personal account of the lives and successive assassinations of three of his close friends — Medgar Evers, Malcolm X and Martin Luther King, Jr. At the time of Baldwin’s death in 1987, he left behind only thirty completed pages of his manuscript.
Now, in his incendiary new documentary, master filmmaker Raoul Peck envisions the book James Baldwin never finished. The result is a radical, up-to-the-minute examination of race in America, using Baldwin’s original words and flood of rich archival material. I Am Not Your Negro is a journey into black history that connects the past of the Civil Rights movement to the present of #BlackLivesMatter. It is a film that questions black representation in Hollywood and beyond. And, ultimately, by confronting the deeper connections between the lives and assassination of these three leaders, Baldwin and Peck have produced a work that challenges the very definition of what America stands for.
View Clip: https://www.idfa.nl/en/film/e1c0f05b-beb1-43c3-bb81-ec29492857c5/i-am-not-your-negro

Available for purchase or rent on iTunes

The House I Live In

Over forty years, America's War on Drugs accounted for more than 45 million arrests, made America the world’s largest jailer, and damaged poor communities at home and abroad.The House I Live In captures heart-wrenching stories from individuals at all levels of America’s War on Drugs. From the dealer to the grieving mother, the narcotics officer to the senator, the inmate to the federal judge, the film offers a penetrating look inside America’s longest war, offering a definitive portrait and revealing its profound human rights implications.
Stream on YouTube: https://youtu.be/QlPNRaXj2OQ

Unraveling the Interplay Between Diversity and Race in the Canadian Experience
LECTURE VIDEO – https://youtu.be/ijL_391Xw9g

National Film Board of Canada

A series of videos and documentaries on anti-racism
https://www.nfb.ca/playlist/anti-racism-films/

White privilege is like an invisible weightless knapsack of special provisions, maps, passports, code books, visas, clothes, tools, and blank checks.For me white privilege has turned out to be an elusive and fugitive subject. The pressure to avoid it is great, for in facing it I must give up the myth of meritocracy.  If these things are true, this is not such a free country: one's life is not what one makes of it; many doors open for certain people through no virtues of their own."
http://psac-ncr.com/white-privilege-unpacking-invisible-knapsack

Guide to Allyship, A Lamont

Being an ally is hard work. Many would-be allies fear making mistakes that could have them labeled as “-ist” or “-ic” (racist, sexist, transphobic, homophobic, etc). But as an ally, you’re also affected by a system of oppression. This means that as an ally, there is much to unlearn and learn—mistakes are expected. You need to own this as fact and should be willing to embrace the daily work of doing better.

As an ally, you need to own your mistakes and be proactive in your education, every day.
https://guidetoallyship.com/

Ally, Accomplice, Co-Resistor. Being involved in any kind of anti-oppression work is a way of being and doing, of self-reflection, checking your motivations and continual learning. The Indigenous Ally Toolkit prepared by the Montreal Indigenous Community Network is a good resource.

Decolonize First; A liberating guide and workbook for peeling back the layers of neocolonialism by Nahanee Creative
https://www.nahaneecreative.com/products/decolonize-first-a-liberating-guide-and-workbook-for-peeling-back-the-layers-of-neocolonialism

Sandy & Nora Talk Politics
Nora Loreto and Sandy Hudson discuss complex issues facing our society and work through how we can approach solving them. Popular episodes include defunding the police, the Land Defenders at Wet’suwet’en and Justin Trudeau’s use of Blackface.
https://sandyandnora.com/

About Race with Reni Eddo-Lodge
www.aboutracepodcast.com
From the author behind the bestselling Why I'm No Longer Talking to White People About Race, comes a podcast that takes the conversation a step further.

Note: The content linked below is kid-friendly, but like any discussion of difficult subjects a trusted adult should be available to help answer any questions that may arise.

Where can I learn more about Indigenous people in Canada?
https://www.cbc.ca/kidscbc2/the-feed/where-can-i-learn-more-about-indigenous-people-in-canada

What Canadian Kids Should Know About Black Lives Matter
https://www.cbc.ca/kidsnews/post/watch-what-canadian-kids-should-know-about-blacklivesmatter

Want to be a non-appropriative ally?

How White People can Advocate for the Black Lives Matter Movement.
Listen to this recent NPR interview with Dr. Uzodinma Iweala, medical doctor, author and CEO of The Africa Center- a culture & policy institute in New York City.