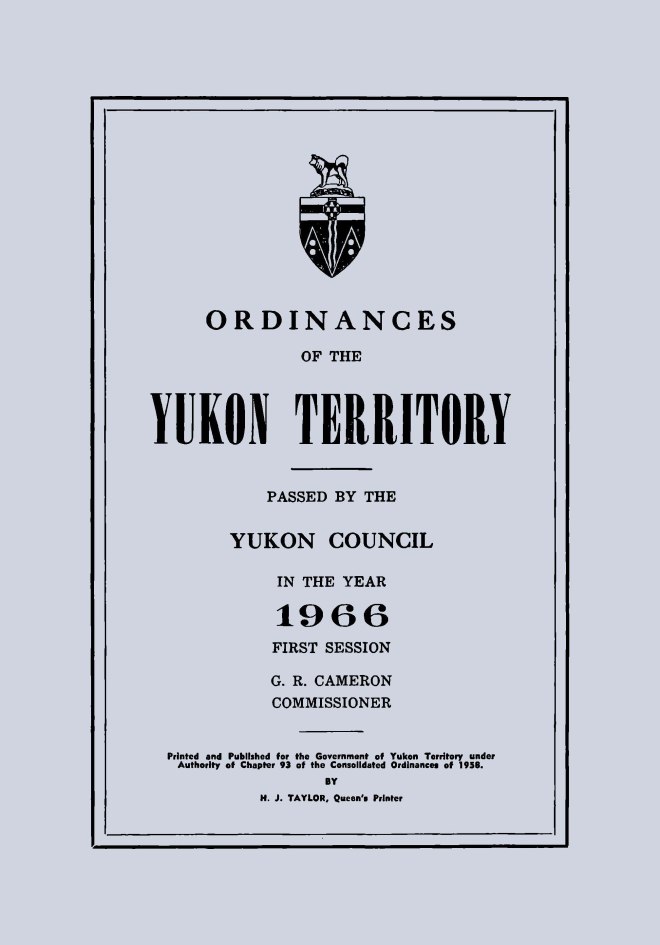 In November of 1965, Yukon’s civil servants were among the few remaining Canadian government employees lacking any form of unionized association. On a Sunday afternoon in late 1965, this union was founded by a dedicated few who sought fair equity and representation for themselves at a time when their government had not even recognized a union for its federal employees. November 21, 1965 saw the formation of the Yukon Territorial Public Service Association. At the Whitehorse Canadian Legion Hall, the Yukon Territorial Public Service Association (YTPSA) was founded.

YTPSA founding members included first President Bob Smith, Directors Jean Besier and Harry Thompson and Ione Christianson. Though initially intended to represent workers in Whitehorse, it was Ms. Christianson who advised that the membership expand to include the rural areas as well. The constitution adopted at the first meeting stated the union’s purpose was “to unite all employees of the Government of the Yukon Territory for the promotion of their several interests and to promote their welfare and the betterment of their economic and cultural interests.” By promoting “a spirit of amity, unity, loyalty and efficiency in the Public Service” and through affiliation as a component of the Civil Service Federation of Canada (CSFC) the group sought the right to negotiate Collective Agreements for their members.

The first order of business for the new union was a pay raise. Working conditions and very low rates of pay at the time contributed to a powerful sense of inequality with both provincial Government employees and Federal workers. President Bob Smith approached Yukon Commissioner G.R. Cameron requesting an immediate 10% raise in pay. The union’s strong argument defending the request was forwarded to Arthur Laing, then Minister of Indian and Northern Affairs. In April of 1996, thanks to the determination of the group and the “enlightened thinking” of Commissioner Cameron, the YTPSA and its members achieved their wage increase request. 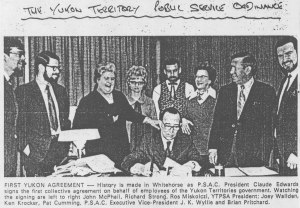 This was accomplished without the legal right to bargain collectively on behalf of the growing YTPSA membership. By early 1967, records show that the YTPSA was pressing the Commissioner to introduce Collective Bargaining Legislation. This was denied. At the time, the signed membership constituted less than the required 50% plus one of the eligible 380 employees. The YTPSA was by now a fully accredited Local of the newly formed Public Service Alliance of Canada (previously the CSFC) and it was this association that helped drive up membership numbers.

In 1971, the YTPSA celebrated their first Collective Agreement. The event was marked by the visits of PSAC President Claude Edwards and the PSAC Executive Vice-President J. K. Wylie.

Rates of pay in the 1973 Collective Agreement show that a Key Punch Operator’s wage range was from $6571 to $7607 per year, while a Lottery and Games of Chance Manager could expect a top salary of 16,524. Vacation leave (an important bargaining win) was offered in the sum of 3 weeks leave for the first 5 years of employment, 4 weeks of vacation from the sixth year and 5 weeks for those employees with 15 or more years of service.

There was no dental plan at the time though the employer was seeking a plan provider. Medicare costs were increased in the 1973 CA from a 50/50 premium split to a 60% payment from the employer. Maternity leave was in force; a woman who was pregnant was expected to take maternity leave starting 11 weeks before her due date and ending no later than 16 weeks after delivery. This was leave without pay, and was subject to employer approval. At any time however, “notwithstanding the above, the Employer may direct a female employee who is pregnant to proceed on maternity leave at any time where, in its opinion, the interest of the Employer so requires”. Male employees were offered a day of paid special leave at the discretion of the Employer on the occasion of the birth of his son or daughter. We’ve come a long way! 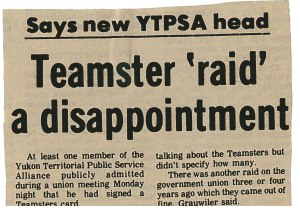 The YTPSA faced many challenges during its first decades. A determined first raid effort by the Teamsters saw the resignation of the entire Executive in 1975, and was followed by another attempt several years later. There were struggles with the PSAC and internal conflicts amongst elected officials of the YTPSA. All the growing pains however happened alongside the continued strengthening of the Union. As the years passed, new Bargaining Units were certified and the membership grew to exceed 5000 members and more than 20 different employers.

We’ll be telling more of the history of YEU over the coming months; we hope you’ll check back. If you were part of the story please contact us to share what you remember. There are many gaps in our records of those early years. 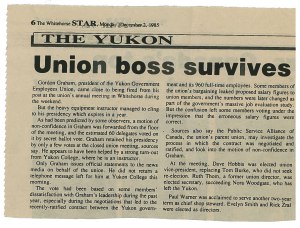 YEU, YGEU, YTPSA has a proud history. We were born in the Yukon, raised in the Yukon. Our story is not one of a group of workers “organized” by any big outside force. We did this for ourselves, by ourselves. YEU developed largely independent of the guidance and structures that were available to other unions.   Our leaders were hardworking and flawed without a doubt, but they pressed on through mistakes as they learned how to achieve their collective goals. We are grateful for their solidarity.