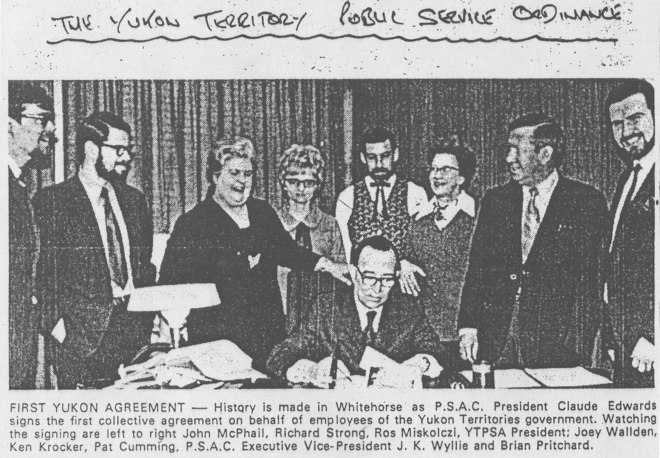 “It is time for an imaginative, courageous, and positive approach to salaries, [and] working conditions.”

On a Sunday afternoon in late 1965, a group of Yukon civil servants gathered together in the Whitehorse Legion Hall. Having long felt they were not offered the same treatment as their federal colleagues, the Yukon workers wanted change. They met to adopt the constitution of an association uniting the collective interest of all Yukon Territorial Government employees.

Living standards were dropping as salaries failed to keep pace with the rising costs of living in the North. Salaries fell victim to inflation with a difference of over 40% in food costs between Whitehorse and Edmonton. The results, especially in communities outside of Whitehorse, were evident. Public Service morale in Yukon was down and staff turnover was constant. Looking to improve the lives of all YTG employees and their families, the Yukon Territorial Public Service Association was founded.

In the early months of the YTPSA,  documents note the Union’s immediate goal was to achieve a pay increase of 10%. Although lacking collective bargaining rights, they sought through their negotiations to provide a higher standard of living for their members. In a letter addressed to then Commissioner G.R. Cameron, YTPSA President Bob Smith wrote that it was time “for an imaginative, courageous, and positive approach to salaries, [and] working conditions.” By April, 1966, they were successful in achieving their wage recommendation.

This is the first in a series of articles sharing the history of the Yukon Employees’ Union, now celebrating 50 years. Follow www.theunionbillboard.com to receive regular updates.