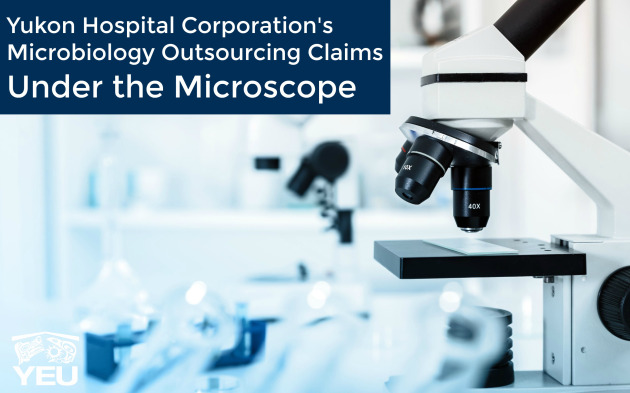 The Yukon Hospital Corporation responded swiftly to the Union’s recent statements exposing the corporation’s plan to outsource microbiology testing to St. Paul’s Hospital. They were quick to appease the public and the press, saying there was nothing to the story. They insisted our information was false.

They said the contract had always existed, and therefore nothing important would change. And anyway, even if it did change, it wouldn’t matter much. They suggested it might be an improvement in service – since we don’t have the same technology here – plus it’s cheaper and easier to send the work south. And hey, it’s only about 1,500 tests a year anyway.

We want to make sure you know the truth.

In the hospital’s own RFP, they cite almost 20,000 microbiology tests per year in the proposed scope of work. Through ATIPP, YEU has acquired a copy of the Hospital Corporation’s recent Request for Proposal for a Professional Services Agreement to provide Laboratory Medical Directorship, Laboratory Consulting and Biological Sample Testing Services (RFP #DTS-2017-08-28) issued August 28 2017 and closing October 31, 2017. According to the hospital’s own data, the quoted 1500 tests per year is less than the work of one month.

Yukoners deserve healthcare that is reliable, timely, and performed close to home. Exporting tests as common as a throat swab for Strep, a urine or STI test makes no sense. It’s taking us backward, rather than moving us forward.

The Yukon Employees’ Union is raising this issue with the public because it’s important. The hospital assures us that no members will lose their jobs, but will be shuffled into other positions. We are not raising this flag because we are concerned about the loss of union jobs, but because we are worried about protecting the services we all rely on.

Downgrading our ability to diagnose and treat illness quickly and locally is a bad idea. Adding time between testing, diagnosis and treatment will not enhance our health and we believe it’s a terrible plan. These discussions and negotiations should be transparent, and those appointed to protect the health of Yukoners must stay focused on more than the cost.

We’re asking the Yukon Hospital Corp for answers on behalf of all Yukoners.