Trans Rights in Yukon; One Small Victory at a Time 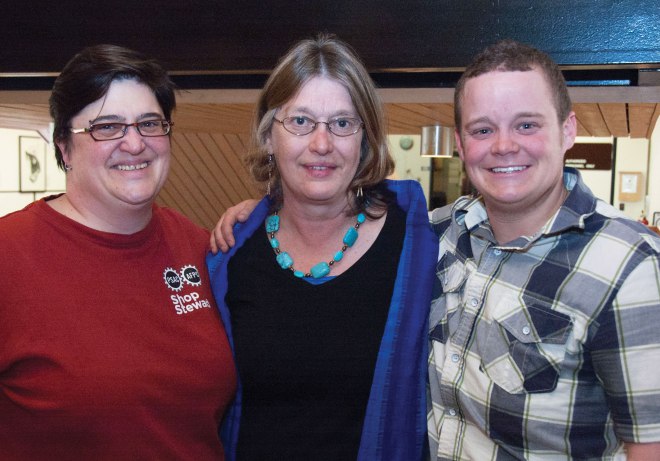 May 14th 2015 marked a positive step toward a more equitable Yukon.  Lois Moorcroft, MLA for Copperbelt South presented a motion to change the Yukon’s Human Rights Act to include language specifically protecting the rights of Yukon trans people. Her motions read:

THAT this House urges the Government of Yukon to review, and introduce amendments to, the Human Rights Act, before the end of its current mandate, to protect the human rights of trans people by adding “gender identity” and “gender expression” under section 7 of the Act as a prohibited ground for discrimination. 525. Ms. Moorcroft (Motion No. 994)

THAT this House urges the Government of Yukon to review its legislation, programs and services and introduce required amendments or policy changes in order to ensure the human rights of trans people are fully protected.

To most progressives, that seems straight forward. Simple. A no-brainer, even.  Yukon Party MLA Brad Cathers,  Minister of Justice countered that all Yukon people are protected under Article 7 of the Yukon Human Rights Act which lists” sexual orientation” as prohibited grounds for discrimination.  Ms. Moorcroft put forward the argument that sexual orientation is a different thing entirely from whether or not one feels their gender identity aligns with the gender designated to them at birth.

The motion was debated, spun around, debated again, argued for and argued against. In the end as an olive branch and with a nod to the large gallery of concerned members of our community, Mr. Cathers proposed amending to the motion to add the words CONSIDER INTRODUCING AMENDMENTS and THE NEXT TIME THE ACT IS REVIEWED.

Not surprisingly, Ms. Moorcroft (and the gallery) felt the government’s offer to CONSIDER changing the legislation at some theoretical distant future date was not in keeping with the spirit of the motion.  The proposed amendment provided no certainty, no sense of urgency and no genuine commitment to change.

The floor of the Legislative Assembly became quite animated, with MLA’s and Ministers leaving the room and returning, conferring in the hallway with pages ferrying notes back and forth across the floor.

When all was said and done, and thanks in no small part to the contributions of Klondike MLA Sandy Silver, there was unanimous agreement to pass the motion without the word CONSIDER included.  The work will now be to ensure the Yukon Party maintains its commitment and prioritizes a review of the Yukon’s Human Rights Act sooner than later.

THAT this House urges the Yukon government to advance equal rights for transsexual, transgender and gender-variant people by:

(1) introducing amendments to explicitly include “gender identity” and “gender expression” under section 7 of the Yukon Human Rights Act as a prohibited ground for discrimination the next time the act is reviewed;

The motion received the unanimous support of all MLA’s in a recorded vote.

PSAC and YEU Activists were present in the gallery along with other community members. YEU delegates to the PSAC National Convention in Quebec City in early May were particularly interested, as a series of resolutions addressing the rights of transgender people were brought to the floor, and all were passed with overwhelming support.  Unions have always walked alongside those who work to change the status quo. We are proud to be a part of the journey.

Never doubt that a small group of thoughtful, committed citizens can change the world. Indeed, it’s the only thing that ever has.