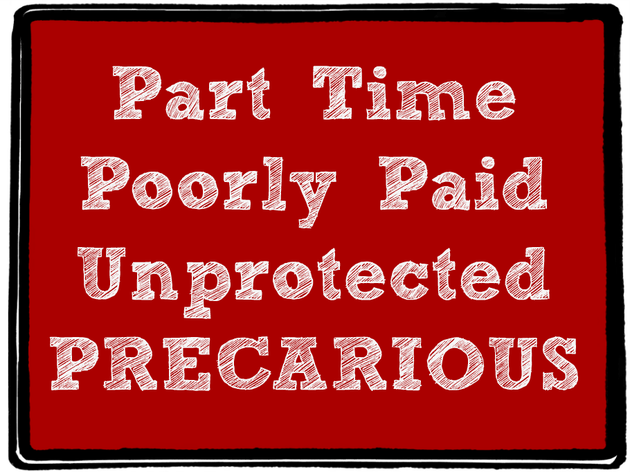 Precarious. The word makes me think of danger, uncertainty and risk. The definition is “held through the favour of another, obtained by asking or praying and dependent on the will of another”.

When you put the word “workforce” behind precarious it takes on a whole new meaning. If it sounds horrible, that’s because it is. Lots of precarious work is mis-labelled as offering “flexible-hours” or is classified as temporary, contract or seasonal. This precarity is accepted as the price of an entry level job, or as a way for older workers to remain employed to supplement their CPP or pension, if they’re lucky enough to have one. Looking around, we see the growth of the “gig economy”. Many young workers know they’re not likely find a single job that will sustain and support them – they’ll have to juggle multiple “side-gigs” to pay the bills.

Across Canada, companies and governments are staffing permanent positions with contract and temporary workers. These vulnerable workers do the same work as permanent employees – often working right alongside the permanent staffers, but they are denied the rights of full employment. These workers are subject to unreliable income, no job security, and lower wages. Thanks to the nature of their employment, they’re often denied the right to join a union. Even when they have the right to unionize, many are afraid – they know full well how easily they can be replaced.

Women, youth, minorities and migrant workers are much more likely to fill these kinds of jobs- at least that has been true in years past. The demographics are changing though. Permanent employment across many sectors has shifted to precarious jobs through outsourcing, use of employment agencies, and the inappropriate classification of workers as “short-term” or “independent contractors.”

Does this type of exploitation exist in the Yukon? Absolutely! Over the last few years Yukon Employees’ Union has successfully unionized a number of workplaces that follow this staffing model. Many are organizations providing social services to vulnerable community members. These are often non-profit organizations, overseen by volunteer boards of directors. Reliant on government funding or grants, there is rarely much room to maneuver in their staffing budgets, so some rely on “creative employment standards” to meet their staffing needs …precarious employment resulting in high staff turn-over rates. Of course these outcomes can also result in the organization’s diminished ability to meet client needs.
People who choose to work in care and service roles are some of the most compassionate and empathetic people I have met, hard-wired to put the needs of those they serve before their own needs. It’s a sad truth that most are also struggling to make ends meet, working more than full time hours, working more than one job, with few benefits and no job security.

While these non-profit sector bargaining units are small, there are now roughly 300 Yukoners that can count on a living wage, benefits and perhaps even some form of retirement package. This means they can do the work they love without struggling with the precarity of so many similar jobs.

Our goal as a union is to remind employers of their contractual obligations to their workforce. It’s not acceptable to manipulate the rules of engagement to keep workers from accessing the full benefits of their labours. When a seasonal employee is re-hired year after year, but laid off for one day each year so the employer can sidestep the duty to provide a full employment package, we’re going to step up and challenge that. We don’t believe in a two-tiered workforce, with permanent and precarious temporary workers doing the same job while receiving wildly different levels of respect and payment.

We have had some success with our larger Yukon employers by monitoring the use of on call, seasonal and casual employees. We will continue the pressure to ensure anyone working full time hours is treated equitably, with a proper rate of pay, benefits and workplaces that are safe both physically and mentally. To date YEU has been able to facilitate those changes for about 50 Yukon workers.

What difference does the permanent job make? Same job, same or similar rate of pay, with a benefit plan, the ability to contribute to a pension, and stability! Think of the impact on a worker’s life; a permanent job (not a precarious, seasonal job or never-ending series of temporary contracts) can mean the difference between being accepted or denied for a mortgage. Only the employer benefits from staffing permanent positions with contract, seasonal and temporary workers. Our communities suffer, workers suffer, and the inequities between co-workers creates an unjust working environment.

50 workers now in permanent jobs; 300 Yukoners working in service roles who are now able to count on a living wage and union representation – those are no small achievements. We’re not done, but that’s okay. We’re going to keep at it – stay tuned!