NO Politics with your paycheque? 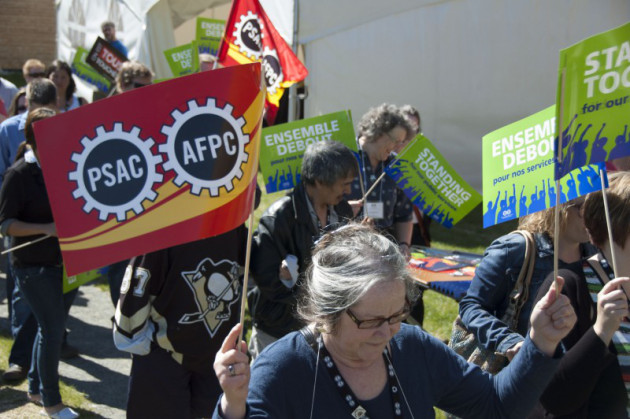 If you’re a member of YEU, chances are that’s an accident. You got a job in a “union shop” where workers had already decided to unionize, often many years before you were hired. As a new employee you were given a union card to sign and a Collective Agreement – your contract with those who write your paycheque.  Maybe you signed the card and mailed it to the union, maybe you didn’t. Either way, because of where you work you are unionized. You pay union dues and are protected by a collective agreement whether you think about it or not. Maybe you think it’s great to have a union job; better pay, better working conditions and probably a pension. Maybe you don’t give union membership a thought; you get a newsletter now and again and every few years someone tries to get you out to a contract ratification meeting. Whatever; sometimes you notice, sometimes you don’t.

What does it mean to be a union member if you don’t really care one way or another? Is union membership something you identify with? Do you consider yourself “union”? Many of our members don’t like to think of themselves as “union”. We’re curious about that. We’re curious about the kind of disinterest that allows some to accept all the benefits of membership on the one hand while disassociating on the other or worse, calling out unions as bad or selfish, greedy or political.  Most of the advantages we take for granted are the direct result of union membership. We’re not talking about the historical gains of unions long ago but the actions of your union representatives now – every day, every year and through every single round of bargaining. The contract you enjoy is the result of an ongoing act of will – a series of determined actions by colleagues whose names you don’t know. Maybe you do know who they are, in fact, but because they’re “union” you don’t associate too closely with them.

Look around the country at what’s happening to unionized workers at every level of the professional and pay scale. If you pay attention to what’s been happening in to the teachers in BC or to fast food industry workers, bullied and pushed around by huge multinationals making billions in profit you can see that those with the money hold the power. The tide of profitability will carry away workers who are not organized. Being organized, being in a union is the only real power available to workers. Solidarity is not just a song… it’s an adhesive force that allows workers the strength to hold on to what they’ve got. Don’t think for a minute that the benefits you enjoy as a union member would continue unchanged if unions suddenly evaporated. What would possess any employer to willingly eat into their bottom line with the kind of pay and benefits unions have secured?

If you disagree with labour’s political agenda it’s important to think that through. The labour movement IS political by its very nature. The labour movement has had to be a political force since the very first collective was formed. Then as now, no business owners wanted unions to gain a foothold. Intense pressure was put on governments to staunch workers’ power a hundred years ago and that pressure has only intensified.

Business interests, corporations, commercial advocacy groups and industry lobbyists work the political system hard to ensure their way is clear. Legislation is constantly being changed, tweaked or neutered so big business can keep making big money.  They have millions, even billions of dollars to advance their agendas. Unions have to fight back.

Labour will continue to be political; YEU/PSAC will continue to be political because it’s all we’ve got. We must push lawmakers and legislators to keep the needs of workers, of average Canadian families on their collective radars. We won’t tell you who we think you should vote for. We WILL support candidates and parties whose platforms promote workers’ rights. We WILL call out and challenge those parties & officials who ignore the rights of Canadian workers. If Labour stepped out of politics completely, the loudest voices governments would hear would be the strident and insistent demands of those who already have all the power in this country; the corporations.

Maybe you feel your dues shouldn’t go to support any political activity by your union. Maybe you don’t want to read about it in your newsletter or see your union involved in political action in the community. We respect your opinion. We also respect your right to a strong Collective Agreement, to collective bargaining rights and to a decent pension. So we will continue to agitate, advocate and work on behalf of Canadian workers. Labour will continue to push against laws that strip away protections and undermine the ability of unions to ensure our members jobs and lives are protected.

You may not be “union” but if you enjoy a union paycheque, union benefits and the security of a negotiated contract, guess what? Even those members who aren’t “union” – we’ll keep right on fighting for you too.