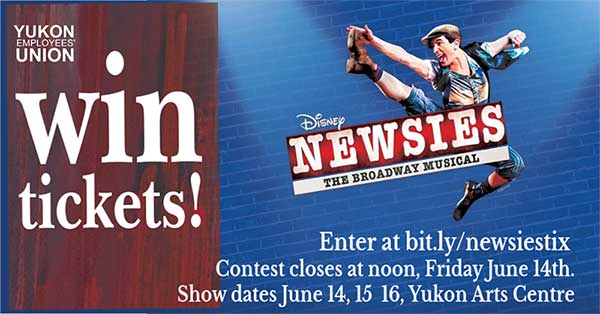 The Yukon Theatre for Young People is staging the Broadway show Newsies, the story of a group of newspaper boys in New York City. The boys went on strike over an increase to the wholesale cost of the papers. This Tony Award winning show offers a fantastic musical score, great choreography and a thought-provoking story of solidarity and risk.

The YTYP’s Newsies cast was given a set of questions from Yukon Employees’ Union, to see whether the show’s storyline and content impacted the young people’s view of unions and their own power. The following amalgamated response offers real hope that these young workers may be the future we need.

The show runs June 14 through June 16th at the Yukon Arts Centre. Tickets available at this link.

Selling "papes" was the only income for most of the newsies; most were living in poverty, sleeping in abandoned buildings and getting food from strangers. The fact that Pulitzer raised the price of the newspaper would have made it almost impossible for most to live - even the littlest difference would drive most of them to steal to survive. Even more than money, the newsies stood to lose a sense of connection with one another. Problem was, nobody knew.

They probably didn’t think it through. They were angry and fed up with the way Pulitzer and his company had been treating them, so a strike seemed like their only option. I do believe if they had evaluated the risks of the strike, they would still make the same decision.  Nobody had second thoughts, for a while anyway. They all knew it would be dangerous, but they really only started to question the sensibility of their "crusade" when the danger hit, literally.

The decision to strike came from desperation. After all, what is the worst that could happen? They could lose everything they had - but many of them had nothing to begin with. Those that had something to lose didn’t make the decision as easily; there was more at stake for them.  In modern times I think the stakes are almost higher and many actually have more to lose if the strike doesn't succeed. The newsies had nothing, so such a huge leap of faith was expected - that’s how they survived on the streets.

The main villain in Newsies is power. We see it dominate throughout the whole show, expressed through the press, the government, and even the newsies when they got the power on their side. You do as you please with power, but it won't always be good or bad.

Before this show, I hadn’t put much thought into this topic. Now I am more aware about child labor and inspired to learn more. I don’t know much about unions either but I am curious about the benefits of unions in a workplace. This show has given me a sense of empowerment and shown me the importance of “all for one and one for all.

I think there is most certainly still a need for labour movements in the workforce today. As long as there are people in power over others, some of them will always try to take more than they deserve and withhold rights from others. This is why labour movements and unions are so important – they help the oppressed people on the bottom to stand up for themselves and fight for what they need. Unions are a critical part of all labouring societies, and are an invaluable way of seeing injustice conquered.

The most important message I took away from this show is that even though I am a teenager I shouldn’t let anyone treat me as anything other than equal. No matter if it’s my boss, co-worker, parent or teacher. I still deserve respect even if I don't have as much experience or knowledge. There is absolutely strength in numbers, and working together towards a mutual goal of justice is one of the most important things you can do, but the number one lesson I see, is to never give up, and that with enough hope, and willpower, you can do anything.

*This story was compiled from the words of several cast members.