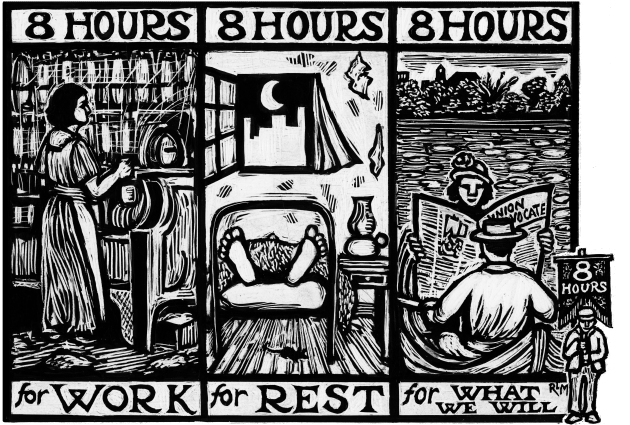 May Day is celebrated by millions around the world as International Worker’s Day. A national public holiday in many countries, it has come to be known as the original Labour Day and honours both the contributions of workers and the achievements of the Labour movement.

The origins of May Day are bloody. On May 1 1886, workers in Chicago went on strike en masse, demanding an eight-hour work day. In the plans for 2 years, workers were ready to march. Up to 80,000 joined a parade up Michigan Avenue, arm-in-arm carrying union banners demanding shorter hours of work, higher pay  and an end to child labour.

A May 4th demonstration turned violent when a bomb exploded in the ranks of police on hand to disperse the crowd. Police opened fire on the crowd and in their panic many shot their own men:  67 policemen were wounded and 7 died, though only one as a result of the bomb blast. Four workers died that night and many more were injured.

Martial law was declared and labour leaders were rounded up and jailed across the US. In Chicago, four labour activists were tried & hanged for their  roles in the Haymarket Affair. Three more were pardoned shortly after, and the unjust judicial process was condemned by the Governor.

Today, May Day is celebrated as Labour Day in almost every industrial nation. During the 1990’s, the Chinese Government even created a week long holiday to honour its workers, though the holiday was restored to 1 day in 2008.

Despite its American origins, Labour Day is not observed on May 1 in the United States.  Concerned by the political threat of a holiday conceived by socialists & anarchists, Grover Cleveland pronounced the first Monday of September as the official Labour Day in 1894. During the “Red Scare” years of the 1950’s, Eisenhower went further and declared May 1 “Loyalty Day” in America.

In Canada, a September Labour Day was also declared a holiday by Prime Minister John Thompson in 1894, bowing to pressure from the working class. Canadian Labour organizations do honour the day however, and we wish you  a very happy International Workers’ Day on May 1, 2016.